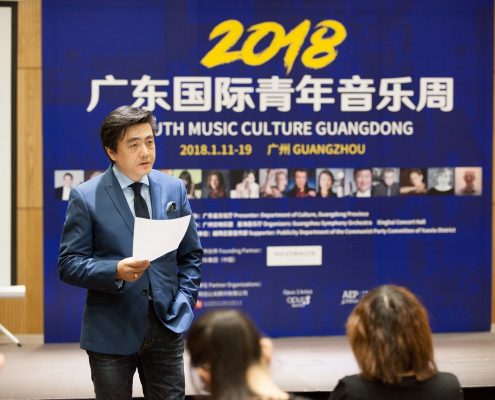 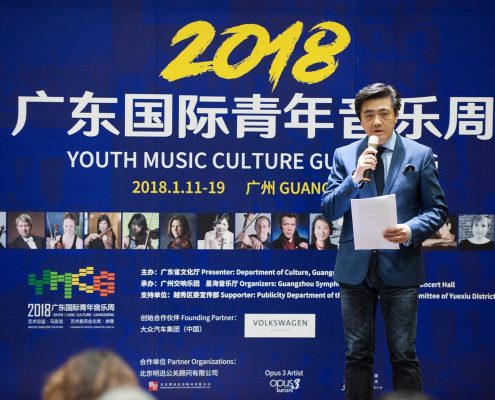 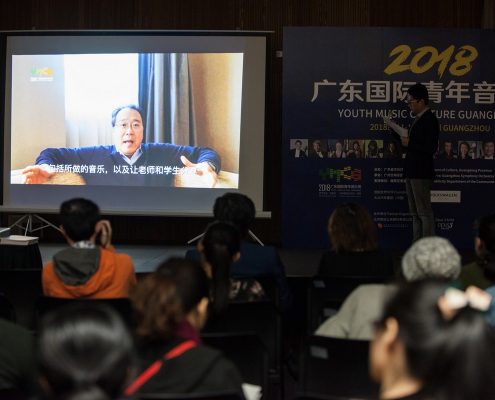 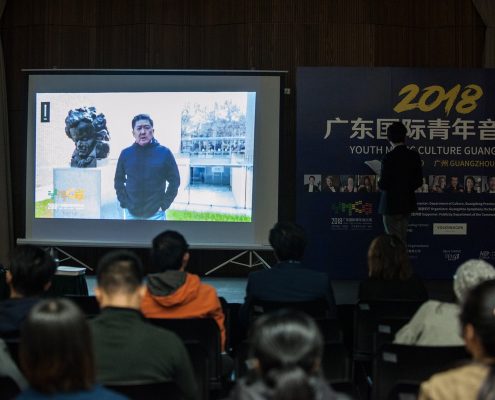 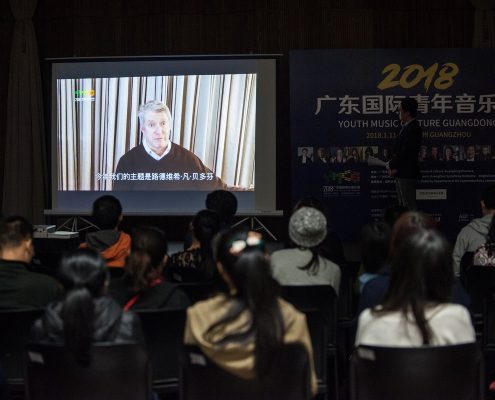 Presented by the Guangdong Provincial Department of Culture, organized jointly by the Guangzhou Symphony Orchestra (GSO) and Xinghai Concert Hall, supported by the Publicity Department of the Committee of Yuexiu District and with Volkswagen Group China as Founding Partner, the 2nd Youth Music Culture Guangdong (YMCG) will take place between January 11 and 19, 2018 in Guangzhou. During that period, YMCG Artistic Director Yo-Yo Ma and his teaching faculty will work with young musicians from four continents—spanning a wide range of educational background and experience—to form a new YMCG Symphony Orchestra. Their activities will take place in a cultural hub comprising the GSO headquarters, Xinghai Concert Hall and a temporary Music Tent on Ersha Island. Together they embark on a journey traversing East and West, classical and modern, performing masterpieces written by great composers as well as musical improvisations.

In his report at the 19th CPC National Congress, President Xi Jinping provided guidance to those working in culture, encouraging them to “cherish our cultural roots, draw on other cultures, and be forward-thinking.” By steadfastly adhering to these principles, we promote the creative transformation and innovative quality that distinguish Chinese traditional culture. YMCG is a place where young musicians not only advance their technical prowess, but also develop individuality and creativity. The project motivates young musicians as they strengthen their confidence in their own culture, in turn fostering the long-term development of Chinese music.

Yo-Yo Ma’s music crosses among cultures and ethnicities, bearing testament to the fact that music knows no boundaries. Ma is a symbol of an open and embracing musical attitude and an icon for cross-cultural exchange and dialogue. New music created by Yo-Yo Ma, his distinguished teaching faculty and young musicians of diverse backgrounds conveys a strong message to the world: that Guangdong and Chinese musicians are keen to communicate and engage in dialogue, sharing the multicultural message behind the music.

As the newest internationally branded artistic project to emerge from Guangdong province, YMCG has already proven itself at home and abroad. The depth of engagement and dialogue that started at the inaugural YMCG (January 2017) were widely acclaimed. Chinese Culture Pictorial used “opening a new page for the Chinese symphonic world” in the title of an in-depth feature on YMCG that has since garnered enormous impact.

During the inaugural YMCG, which lasted nine days, the YMCG Symphony Orchestra comprised young musicians of Chinese descent coming from more than 20 cities around the globe. More than 100 masterclasses and workshops took place along with four concerts and five “Music + Dialogue” presentations, as well as an exchange session with faculty and students at Sun Yat-Sen University. The combined events attracted more than 6,000 audience members, with videos on social media receiving more than 15 million views. Not only was footage of YMCG shown in New York’s Times Square, but also the Financial Times and international mainstream classical music magazines carried detailed reports of the activities, introducing this project to the world.

Focus on Beethoven and a “music marathon” challenge

In comparison to the inaugural year, the teaching faculty of 2018 YMCG comes from even more wide-ranging backgrounds. Apart from Yo-Yo Ma, renowned conductor Michael Stern and core members of the Silk Road Ensemble, YMCG has invited principals of America’s leading orchestras such as John Yeh, clarinetist with the Chicago Symphony Orchestra for more than two decades, multiple Grammy-winner double bassist Edgar Meyer, Juilliard School and Curtis Institute viola professor Hsin-Yun Huang, violinist Cornelia Heard who heads the Strings Department at the Blair School of Music at Vanderbilt University, violinists Pamela Frank, Mario Gotoh and Hanneke Cassel as well as piano professor Anna Polonsky to join the faculty. Another YMCG faculty member is Wu Man, the inimitable pipa virtuoso originally from China who has built a reputation in America and Europe; she is also a member of the Silk Road Ensemble. YMCG also welcomes three returning faculty members—percussionist Joseph Gramley, cellist Mike Block and Harvard professor Tina Blythe—who were widely praised for their contributions to the inaugural session. These 15 first-rate international musicians will lead almost 200 large- and small-scale intensive workshops, rehearsals and lectures during the nine-day period, inspiring participants to engage in dialogues musical and otherwise. Yo-Yo Ma and some members of the teaching faculty will visit the Foshan branch of FAW-Volkswagen. At the site, they will engage with young members of the workforce at this leading car manufacturer, sharing their ideas on “connecting cultures, creating trust.” Public and ancillary activities during YMCG will take place in both the Xinghai Concert Hall and the temporary Music Tent.

The year 2017 marks the 190th anniversary of the death of Ludwig van Beethoven, and the 2018 YMCG will focus on this classical master. To quote the words of Yo-Yo Ma: “As an improviser, virtuoso pianist, and composer, [Beethoven] shows us how an artist who is able to be many things produces the great creativity we need to understand change and chart a new course—something of great relevance today.” In the opening YMCG concert (January 11), Artistic Director Yo-Yo Ma will appear on stage at the Xinghai Concert Hall along with his teaching faculty, taking us on a marvelous musical journey.

One of the most anticipated and exciting events of the 2018 YMCG is the closing concert (January 19), presented as a “music marathon.” All young musicians participating in the 2018 YMCG will appear on stage in different configurations from 2 p.m. to 9 p.m. in chamber and improvisation ensembles, culminating in the YMCG Symphony Orchestra performing Beethoven’s Symphony No.3 (“Eroica”). Under the guidance of YMCG’s innovative and visionary teaching faculty and having experienced more than a week of training and breakthroughs, young musicians will surely surprise the audience with new perspectives as they “play” with improvisation and unlock fresh inspiration.

“Making friends through music”: A great way for young musicians to grow

Now finalized, the selection of young musicians for the 2018 YMCG from different countries and cultures fits perfectly with the organization’s mission of “connecting cultures, creating trust,” with 62 musicians hailing from four continents—Asia, Europe, America, Australia—comprising Chinese and other ethnicities. All under the age of 35, these musicians will meet in Guangzhou at the YMCG. Among them are young orchestral professionals and students from renowned conservatories in China and abroad.

The renowned American conductor Michael Stern returns for a second year as YMCG Symphony Orchestra Music Director and Conductor. It is Artistic Director Yo-Yo Ma’s express wish that everyone makes connections during the period, from striking new musical relationships to establishing longer-term friendships. After its conclusion, young musicians can bring different philosophies and ideas into practice not only in music but also their daily lives. The organizers look forward to watching creative sparks fly as “conservatory-educated” young musicians interact with YMCG’s distinguished faculty.

Volkswagen Group China’s AEP-China, a program initiated in 2017 by YMCG Artistic Committee Chairman and GSO Music Director Long Yu, continues its collaboration with YMCG for a second year. AEP-China is established with the aim to inspire China’s younger generation through interaction and engagement in the arts. YMCG is not purely a training camp to improve performing technique. During the nine-day period, young musicians engage in discussion and rehearsals as well as lectures and masterclasses, absorbing the unique musical sensibilities and cultural spirit of the distinguished faculty. Under their guidance, young musicians from different countries and regions will “make friends through music,” learning new cultural and artistic sentiments, experiencing an enthralling nine-day musical feast in the city standing at the forefront of China’s reform and open-door policy. The energetic and creative work of YMCG musicians will enrich all of us, adding colors and textures that encompass music and life, culture and society, tradition and development, fusion and innovation that make up China and Guangdong today.make up China and Guangdong today.