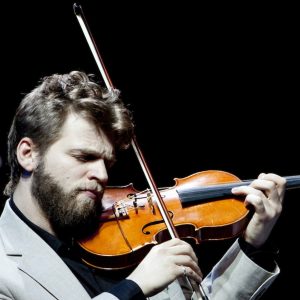 Johnny Gandelsman’s musical voice reflects the artistic collaborations he has been a part of since moving to the United States in 1995. Through his work with such artists as Yo-Yo Ma, Bono, Osvaldo Golijov, David Byrne, Bela Fleck, Kayhan Kalhor, Suzanne Vega, James Levine, Mark Morris, Alim Qasimov and Fargana Qasimova, Nigel Kennedy and Martin Hayes, Gandelsman has been able to integrate a wide range of creative sensibilities into his own point of view. Combining his Classical training with a desire to reach beyond the boundaries of the concert hall, and a voracious interest in the music of our times, Johnny developed a unique style amongst today’s violinists, one that according to the Boston Globe, possesses “a balletic lightness of touch and a sense of whimsy and imagination”.

Johnny was born in Moscow into a family of musicians. His father Yuri is a professor of Viola at Michigan State University, his mother Janna is a pianist, and his sister Natasha is a violinist as well. Johnny lives in Brooklyn with his partner Amber and their kids: Julius Ivry and Raiya Leone.