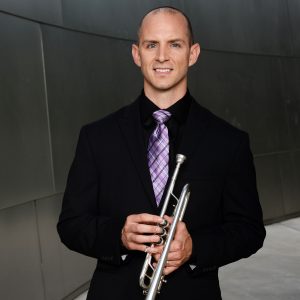 Hooten began his career in 2000 with a trumpet/cornet position in “The President’s Own” United States Marine Band in Washington, D.C., where he was often a featured soloist. He went on to join the Indianapolis Symphony as Assistant Principal Trumpet in 2004, the Atlanta Symphony Orchestra as Principal Trumpet in 2006, and the LA Philharmonic in 2012. He released Trumpet Call, his first solo album, in 2011.

Hooten is on the faculty at the University of Southern California where he and his wife, Jennifer Marotta, teach the trumpet studio. He is a passionate educator and offers workshops on career development, audition preparation, and the mental approach to performance. Thomas has given masterclasses and recitals at Juilliard, Northwestern University, Indiana University, Mannes School of Music, San Francisco Conservatory, Guildhall School of Music, and many other locations throughout the United States and the world.